The thyroid gland produces hormones that are secreted into the blood and are carried to every tissue in the body. Thyroid hormones have important roles in growth, development, and regulation of metabolism. Many factors can influence the concentration of these hormones, and the health of the thyroid gland depends on several genetic, nutritional, and immune-related influences which can lead to either excessive or insufficient activity. Several herbs have been shown to benefit thyroid function through a variety of mechanisms depending on the body’s needs. The use of herbal adaptogens, anti-inflammatories, and immunomodulators will often play an important part in a holistic approach to supporting healthy thyroid function.

Listen to the podcast episode “Herbs for Thyroid Health”

Addressing thyroid dysfunction often requires a multi-faceted, whole-person approach and a thorough understanding of the particular imbalance or pathology. Hormone replacement therapy (either synthetic or desiccated) has been a standard approach to correcting thyroid dysfunction. While this treatment can be very effective for some patients, for others taking thyroid hormone alone neither fully addresses the underlying cause of dysfunction nor resolves their complaints. Traditional medical models have effectively used a herbal approach towards correcting thyroid dysfunction alongside appropriate nutritional and lifestyles changes.1 Some of these botanicals will be explored for their use in hypothyroid, hyperthyroid, and autoimmune involvement, which have demonstrated positive findings from both preclinical and clinical research.

Of the 20 million Americans who have thyroid disease, most have hypothyroidism, a condition where the thyroid gland cannot make an adequate amount of thyroid hormone to keep the body functioning optimally.2 There are two main types of hypothyroidism, with numerous contributing factors:

Bladderwrack is a seaweed or kelp that is rich in organically bound iodine, which is considerably more potent at stimulating the thyroid gland than mineral iodine.7 It has been traditionally used for the treatment of low thyroid function and to aid in weight loss when associated with hypothyroidism, as iodine can stimulate the production of thyroxine and an increase the body’s basal metabolic rate (BMR). Although insufficient levels of iodine can contribute to hypothyroidism, excessive iodine intake can inhibit the oxidation of iodine, which is an essential first step in the synthesis of thyroid hormones biosynthesis.8 In healthy individuals, the thyroid gland has intrinsic autoregulatory mechanisms to adapt to excess iodine; however, patients with thyroid pathology (either hypo- or hyper-) should be cautious not to consume excessive amounts due to the risk of goiter and/or thyrotoxicosis.

Ashwagandha is a well-known adaptogen, traditionally used in Ayurveda for its powerful immune modulating and anti-inflammatory effects. Studies in animals have also shown promising thyroid stimulating activity, and a recent clinical study examined its impact on thyroid function in patients with bipolar disorder.9-11 In that study, one Ashwagandha-treated patient had subclinical hypothyroidism which normalized over eight weeks, while all the patients treatment with Ashwagandha experienced T4 increases from baseline. In another, more recent double-blind, randomized placebo-controlled trial, treatment with Ashwagandha over eight weeks was shown to be beneficial for normalizing thyroid indices in subclinical hypothyroid patients.12 In light of one case report of where Ashwagandha was associated with thyrotoxicosis due to an increase in thyroxine levels (T4), vigilance regarding hyperthyroidism may be warranted.13

Bacopa is a nervine tonic and neuroprotective which also has a long history of use in Ayurvedic medicine. Its reputation for improving cognition and lack of concentration is longstanding. However, Bacopa has also recently been shown in animal studies to help stimulate thyroid function.14 In one study, results showed that an alcohol extract of Bacopa had beneficial effects in preventing hypothyroidism and associated complications by increasing thyroid hormone production, improving antioxidant status, lowering lipid profiles, and protecting thyroid morphology as evidenced by reversal of histopathological changes.15 Another study explored the protective effect of Bacopa on altered thyroid hormone activity and association with Alzheimer’s disease in rats. The study concluded that Bacopa significantly modulated the concentration of T3 and T4, as well as markers of neurodegeneration.16

Coleus is a rich source of the labdane diterpene forskolin, which is known to raise intracellular levels of cyclic AMP (cAMP) and can potentially increase thyroid function as well as stimulate lipolysis within adipocytes.17 Forskolin has similar effects on the thyroid gland to TSH (thyroid-stimulating hormone) and increases the synthesis of T4 from thyroid follicles.18 Animal models using Coleus have demonstrated an ability to significantly increase the secretion of thyroid hormones.19 In one study following treatment with Coleus in rats, levels of TSH decreased while the levels of T3 and T4 increased significantly compared with controls.20

Black cumin seeds have considerable health-promoting effects including antioxidant, anti-inflammatory, and immune-modulatory properties. Numerous animal studies have demonstrated a therapeutic benefit in many chronic diseases including diabetes, hyperlipidemia, and hypertension; however, its protective role in hypothyroidism and specifically in Hashimoto’s thyroiditis have recently been unveiled.21,22 A prominent constituent found within black cumin with well-known antioxidant and anti-inflammatory properties is thymoquinone, and it has also been shown to improve thyroid status in animal models.23 In one study black cumin raised T3 concentrations without changing the concentration of serum TSH. The authors suggested this was due to its ability to repair the thyroid gland and resynthesize thyroid hormone due to an ability to raise antioxidant defense systems.24 Thus its therapeutic effects appear to be in part due to an ability to ameliorate oxidative stress and thyroid cell damage and protect against hyperplasic changes of the thyroid parenchyma which occur in thyroiditis.

Herbs can also be used to help suppress an overactive thyroid. Though less common than hypothyroidism, when indicated these herbs are some of the most effective available for their anti-thyroid effects. Many of these herbs belong to the Lamiaceae or Mint family of plants and are rich in phenolic acids and their derivatives.25

Bugleweed is one of the most important herbs for the treatment of mild hyperthyroidism. It has long been used in folk medicine for this purpose and has been extensively studied with phenolic compounds such as rosmarinic and caffeic acid, which appear to be primarily responsible for its effects. Bugleweed seems to inhibit the effects of TSH and also inhibit thyroid stimulating IgG antibodies, leading to an overall reduction of thyroid secretion. The mechanism of this action is not fully understood, but it is very likely that the plant constituents bind to the TSH receptor.

Bugleweed also appears to inhibit peripheral conversion of T4 to T3.28 Another herb with a similar constituent profile and mechanism of action to Bugleweed is Lemon Balm (Melissa officinalis). Motherwort (Leonorus cardiaca) is yet another herb with traditional anti-thyroid effects with particular affinity towards addressing symptoms of anxiety and heart palpitations.

Living Your Best Life – For Your Health’s Sake with Dr. Oscar Franco

Dr. Oscar Franco reminds listeners to make the most out of life by loving what you do, taking time to exercise, and appreciating the food you eat. 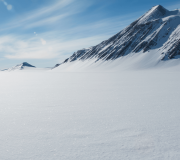 Colin O'Brady talks to NBC reporters about his December 2018 world record: traversing the continent of Antarctica unsupported and unaided.