Vitamin A may be most famous for giving carrots their “X-ray vision” power for young ones – but it is an essential micronutrient for all ages, and for many more functions in the body as well. Vitamin A is a crucial nutrient for numerous functions in the body including supporting vision, immune function, and reproduction; vitamin A also acts more broadly as an antioxidant.

There are two main forms of vitamin A in the human diet: preformed and provitamin A. Preformed Vitamin A are known as retinoids, and they are found in animal sources like liver, fish, fish oil, and eggs. Retinoids are biologically active and available in the body after consumption. Retinoids may appear in the form of retinol, retinal, or retinoic acid; both retinol and retinal have the ability to convert between different forms.

Conversely, provitamin A, which includes different carotenoids, is found in plants and must be cleaved to be activated for use in the body. There are more than 600 known carotenoids, but only three are able to be converted to bioactive vitamin A:

Additional carotenoids that benefit human health in different ways are lycopene, lutein, and zeaxanthin. Vitamin A – via retinoids and carotenoids – plays a diverse role in human physiology.

Vitamin A as an Antioxidant

Beta-carotene, the carotenoid with the most vitamin A potential, is found in many brightly pigmented fruits and vegetables, and it exerts an antioxidant effect on the body by reducing oxidative damage and the effects of carcinogenic agents. Two important potential antioxidant activities of beta-carotene include protection from certain cancer types and the reduction of LDL cholesterol formation which may prevent from heart disease.1

Vitamin A plays a crucial role in immune function and the regulation of numerous immune pathways. Retinoic acid in particular is necessary to promote the formation of immunoglobulin A (IgA)-secreting B cells, which support mucosal immunity.2 Retinoic acid alco contributes to promoting oral tolerance in the immune system due to its role as a cofactor in the generation of inducible regulatory T (iTreg) cells.2 Research suggests that retinoic acid may be involved in the regulation of numerous inflammatory mechanisms including the encouragement of cellular migration during inflammatory processes by inducing inflammatory cytokines.2

Vitamin A is fundamental to the development and function of the eyes. In utero, adequate vitamin A is required for normal fetal eye development. Vitamin A is also required for phototransduction in the eye. Retinal-binding proteins are found in all retinal and conjunctival cells, and these tissues rely on vitamin A for cellular differentiation and vision.3 The retinal pigment epithelium requires vitamin A for the metabolic pathway, thus deficiency of vitamin A is the leading cause of vision loss.3

The NIH Office of Dietary Supplements recommends that adult males intake 900 micrograms (mcg) retinol activity equivalents (RAE), while the target for adult females is 700 mcg RAE daily. These targets are set for healthy individuals. RAE takes into account the activity difference between retinoids and carotenoids. For example, 1 RAE is equivalent to 1 mcg retinol and 12 mcg beta-carotene.

Vitamin A requirements increase during pregnancy and lactation. Vitamin A toxicity is possible  but rare; this is usually due to excessive intake of supplements or active, non-plant, forms of vitamin A. While overt vitamin A deficiency is relatively uncommon in resource-rich areas, deficiency is possible and associated with the following health problems:

Sources of Vitamin A

Vitamin A is commonly found in supplements and multivitamins. Active retinols from preformed vitamin A are readily available in animal-sourced foods like organ meats and butter. Plant-based sources of vitamin include:

Diets rich in fiber, fruits, and vegetables are strongly correlated with positive health outcomes. Vitamin A is a widely versatile nutrient with powerful antioxidant capacity. Numerous functions in the body from eyesight to immune function depend on vitamin A. Including food and supplemental sources of this crucial nutrient on a regular basis can optimize healthy function in the body. 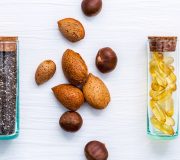 DHA is an essential fatty acid that is crucial for brain structure and function. Ensuring adequate intake throughout the entire life span can help...