Vasomotor symptoms like hot flashes, night sweats, and sleep disturbances are caused by hormonal changes. During the menopausal transition and after menopause, the body produces lower amounts of the so-called “female hormones,” progesterone and estrogen. Lower levels of these hormones in the body lead to irregular menstrual periods and the end of menstruation. Progesterone and estrogen are protective in women and can help prevent development of cardiovascular disease and other chronic health conditions. However, when levels of estrogen, in particular, decrease due to menopause, women are at higher risk of developing chronic health conditions. The reduced levels of the cardioprotective female hormones have led many women to seek hormone replacement therapy (HRT). Because of the hormonal changes, it used to be very common for women experiencing menopause to receive HRT. HRT can help women manage menopausal symptoms like hot flashes and night sweats, as well as vaginal dryness and painful intercourse.2

In 1991, however, the National Institutes of Health launched a large study on women’s health after menopause, called the Women’s Health Initiative (WHI). It studied a variety of health outcomes in over 16,000 generally healthy women, aged 50-79 years. The clinical trials of the WHI were of particular note. They investigated the effects of HRT, diet modification, and supplementation of calcium and vitamin D on cardiovascular outcomes, bone fractures, and certain cancers.

One of the randomized controlled trials of the WHI found that the women who took HRT were at slightly higher risk of breast cancer and cardiovascular events compared to those who did not take HRT.3 Since the study results were published in 2002, there has been a decrease in the number of women who use HRT, with 40-50% of women from Western countries now using natural or complementary therapies to manage their menopausal symptoms. Indeed, the findings of that trial were frightening for patients and healthcare providers alike.4

New analysis has shown, however, that the results of that trial were not as generalizable as had been thought. It is now known that HRT is generally safe for women to use in the short-term, menopausal transition, if they have no history of cancer, blood clots, or cardiovascular disease. Most of the women enrolled in the WHI study had been past the menopausal transition for ten years or longer – recall that the age range of the women enrolled was 50-79 years. After following that population for ten years, the oldest women in the cohort would have been nearly 90 years old, while the youngest would have also been 10 years past menopause on average. The WHI study did not investigate the effect of diet, supplements, or HRT on menopausal symptoms. Rather, it investigated the health outcomes previously outlined, including whether HRT reduced the risk of cardiovascular disease, and found that it did not. Many healthcare professionals and the North American Menopause Society now recommend HRT to women in their 50s who experience menopausal symptoms. HRT can be used safely for up to five years to treat menopausal symptoms.

Alternatives to HRT for Menopausal Symptoms

Though HRT is safe and effective if used under medical supervision, many women prefer to use alternative, non-hormonal therapies to manage their menopausal symptoms. Indeed, up to 40-50% of women use complementary or alternative medicine for their menopausal symptoms. A recent meta-analysis on natural therapies for menopausal symptoms combined the data from 62 studies including over six thousand women.4 The studies included research on therapies such as Chinese herbs, black cohosh, and other more novel remedies and their effects on menopausal symptoms like hot flashes, night sweats, vaginal dryness, and others. After combining extensive data, the results showed that following a dietary pattern that included soy and soy isoflavones was most effective at reducing the number and intensity of hot flashes and other vasomotor symptoms.

Treatments for menopausal symptoms can vary in their effectiveness depending on individual health and other factors. A family history of cancer and cardiovascular disease, dietary habits, level of physical activity, severity of symptoms, and personal preference can all serve to guide women and their healthcare providers toward appropriate therapies for them. 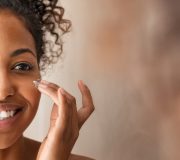 Get that Natural “Glow” When it comes to nurturing outer beauty, the best results come from optimizing nutrition from the...