Vitamin and mineral intake is suboptimal in many Americans, likely due to the declining nutrient content in plants and low consumption of fruits and vegetables.

Vitamin and Mineral Levels in the American Diet

Vitamin and mineral intake is suboptimal in many Americans. The risk is due to the declining nutrient content in plants and the significant gap in fruit and vegetable consumption versus the recommendation; these two factors are creating a substantial risk of not consuming the correct level of multiple vitamins, minerals, and phytonutrients.1-2 22 percent of adults and 37.7 percent of teenagers consume less than one serving of vegetables on average per day, with the median intake of vegetables being 1.6 in adults and 1.3 in adolescents.3 Vitamins D, E, A, and C, and minerals magnesium and calcium are consumed at less than 40% of the Reference Daily Intake (RDI).4-6 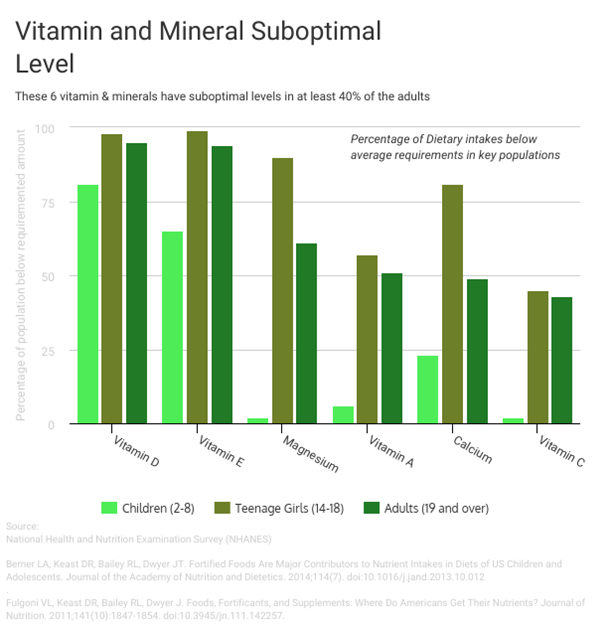 Nutrients in our conventional plants have shown a continued decline over the past 50 years. Davis et al. showed that 43 foods had statistically significant declines in protein, calcium (Ca), phosphorous (P), iron (Fe), riboflavin, and vitamin C,  influenced by the drive to increase yields.7 In 2014, a meta-analysis of 343 peer-reviewed publications showed that flavonoids, total phenolic acids, phenolic acids flavanones, stilbenes, flavones, flavonols, kaempferol, total anthocyanins, and anthocyanins, in organic crops were higher than those in conventional crops.8 They also found a significantly higher level of carotenoids, some vitamins, and magnesium with a significantly lower level of cadmium in organic crops than in conventional crops. In 2012 a meta-analysis in Annals of Internal Medicine, showed a reduced exposure to pesticides in organic foods (plant and animal based).9 Reilly et al. found that utilizing organic farming was key to the increased level of flavonoids in Red Baron onions than those of a traditional pesticide and herbicide application.10

With Americans not consuming the level of fruits and vegetables in their diet coupled with the increasing decline in nutrients from conventional crops; we see why we have suboptimal amounts of consumption of Vitamins D, E, A, and C, and minerals magnesium and calcium. The human body functions best when we consume optimal levels of vitamins and minerals, as they play important roles in immune functions, cellular repair, cofactors in metabolic pathways, bone support, wound healing, and much more.

Magnesium: Are You Consuming Accurate Levels?

Magnesium plays a vital role in enzymatic processes, energy production, electrolyte balance, bone health, glucose management, and more. Magnesium is found in green leafy vegetables, whole grains, wheat bran, legumes, nuts, and seeds. Rosanoff et al. suggest that nearly half of Americans are not consuming a satisfactory level of magnesium.1 Davis showed that magnesium and other nutrients have declined in conventional crops sold in the United States and the United Kingdom over the last 50 years.7 This potential inadequacy in consumption can lead to an increased risk of cardiovascular disease, type 2 diabetes, osteoporosis, migraines, and other concerns.11 Individuals that are older and have gastrointestinal (GI) concerns or type 2 diabetes have added risk of not consuming or absorbing adequate levels of magnesium. 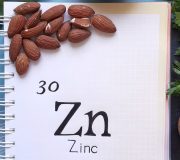 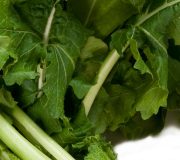