Would you begin by summarizing the nature of the link between the neurological and immune systems?

Dr. Trivedi: We study in the lab a novel type of link between the neurological and immune system, focusing on the antioxidant-based redox status as well as the epigenetic status. Further, we also investigate fluctuations in these systems and any consequent downstream implications towards different diseases like autism-spectrum disorders as well as myalgenic encephalitis/chronic-fatigue syndrome, or ME/CFS.

Particularly, glutathione, or GSH, is the primary intracellular antioxidant in all cells, and its synthesis depends upon the cytoplasmic level of the sulfur amino acid cysteine. As illustrated in Figure 1, cysteine for GSH synthesis can be provided from two sources

During oxidative stress, this balance shifts more toward transsulfuration because of lower activity of the folate and vitamin B12-dependent enzyme methionine synthase, or MS. Increased diversion of HCY to cysteine increases both GSH synthesis and formation of hydrogen sulfide, H2S, which restricts aerobic respiration.

This elegant mode of regulation helps to restore homeostatic redox equilibrium by both augmenting antioxidant supply and reducing  ROS  formation, but this adaptive response to oxidative stress has metabolic consequences that are important for ME/CFS. Inhibition of MS during oxidative stress results in a decrease in methionine and S-adenosylmethionine, or SAM, the universal donor of methyl groups for hundreds of methylation reactions. Indeed, SAM is only second to ATP in its number of biochemical reactions. Quantitatively and functionally important examples include synthesis of creatine, affecting energy reserves; phospholipid methylation, affecting plasma membrane structure and function; mRNA methylation, affecting translation efficiency; and DNA/histone methylation, affecting gene expression via epigenetic regulation.

EAAT3 is also expressed by immune cells and neurons. Competition for cysteine uptake is an important mode of regulation in the immune system. EAAT3 is differentially expressed in the various cell types, with Treg cells having the highest levels of expression. As illustrated in Figure 2, dendritic cells, or DC, engage with naïve CD4+ effector T cells (Teff) and release GSH into the extracellular space. This GSH can be hydrolyzed to release cysteine, or CYS, and can be taken up by Teff cells. The extent of Teff activation is proportional to the extent of CYS accumulation. However, Treg cells compete for such CYS uptake, thereby limiting the immune response. Extrinsic factors that decrease EAAT3 activity can therefore alter the ability of Treg cells to restrict immune response, thereby predisposing to autoimmunity.

CYS transport activity is modulated by a number of factors, which can impact cellular redox status. For example, we showed that while growth factors promote EAAT3 activity, the pro-inflammatory TNF-α and stress hormone cortisol can inhibit EAAT3 activity. As we know, cortisol is critical part of the HPA axis and hence this provides an opportunity to connect the HPA axis and glutathione-based antioxidant status, as well as the epigenetic status in the neuro-immune axis.

Does this link represent a tool that can be leveraged to affect health status, or a therapeutic target where dysfunction may drive chronic illness?

Dr. Trivedi: While preliminary, the current work definitely provides a novel platform that can be investigated to develop therapeutic modalities. For example, several brain 1H-MRS studies of ME/CFS subjects found significantly lower creatine and/or elevated phospholipid-derived choline.1,2 A study by Naviaux et al found that ME/CFS subjects had significant differences in single-carbon folate and methylation pathway metabolites, as well as vitamin B12.3 Regland et al summarized beneficial clinical effects of vitamin B12 injections (methylcobalamin or hydroxocobalamin) and oral folic acid in women with ME and fibromyalgia.5 ALtered DNA methylation status in PBMCs from ME/CFS subjects has been reported, including loci which regulate immune function and glucocorticoid response.6-8 Differential DNA methylation of CpG sites in the perforin (PRF1) locus in response to a psychosocial stress test has also been reported.9

Together, these findings indicate that altered redox-methylation status is an important feature of ME/CFS that needs further evaluation and may be amenable to treatment. Similarly, another great example is the impaired NK cell function in several different diseases including ME/CFS. Several studies have shown that NK cell activity is dependent upon the level of GSH and the provision of N-acetylcysteine augments NK cells’ activity.10

What symptoms and/or conditions should indicate that neuro-immune function should be assessed?

Dr. Trivedi: Current scientific literature describes the importance of the neuro-immune link in several different neurological diseases like Alzheimers and Parkinson’s disease where the role of neuroinflammation and microglia—the immune cells in the brain—are prominent. Moreover, elevated levels of oxidative stress is also reported in such neurological diseases including Parkinson’s and Alzheimer’s disease. Hence, measuring the neuro-immune function in these individuals early on might potentially help in identifying specific disease pathobiology and or diagnostic markers.

How does nutrition affect neuro-immune function?

Dr. Trivedi: As mentioned earlier, our lab focuses on the redox-based epigenetic link between the neuronal and immunological axis. This provides several different therapeutic opportunities. CYS is the rate-limiting precursor amino acid for the synthesis of glutathione. Similarly, methionine is also an amino acid that is highly important for contribution towards the transsulfuration pathway as well as the epigenetic regulation of gene expression, as it provides the methyl group for DNA methylation. One of the major points of regulation of the methionine and the transsulfuration pathway is at the MS levels. Such levels of MS are regulated by the levels of vitamin B12 as described above. Hence, the levels of vitamin B12 are highly important. However, through preliminary unpublished studies in our laboratory, we have observed that the methylated form of vitamin B12 is much more efficient at promoting the antioxidant GSH status as compared to other forms of vitamin B12. Whey protein like lactoferrin, lacoalbumin is highly enriched in CYS and acts as an important source for the synthesis of GSH. Similarly, folic acid and tetrahydrofolate are the other regulators of the MS enzyme. Hence the levels of MTHF and folic acid can also impinge on the redox-methylation/epigenetic axis. Hence, several different nutritional molecules can impinge on the redox-epigenetic axis. As described earlier, such redox-epigenetic axis is highly important for maintaining the homeostasis between the neuronal and immune axis and hence these nutritional factors are highly important. Moreover, preliminary preclinical and clinical evidence supports such molecular interventions in few neurological and/or immunological diseases; however, validation of such studies is still needed in larger cohorts.

What opportunities currently exist for targeted therapies? Does any of this research indicate potential for future interventions?

Dr. Trivedi: The current research is highly basic mechanistic research that provides good fundamental insight toward preclinical and clinical studies that can further the understanding of such redox-epigenetic basis for the neuronal- immune link. Hence, while it is inappropriate to make the direct jump towards a promised clinical intervention, the transsulfuration and methylation pathways definitely provide several different therapeutic avenues that can be explored for possible targeting moieties. Such therapeutic modalities could also include the application of currently available epigenetic-based therapies.

What are the most important ideas attendees should take away from your presentation?

Dr. Trivedi: Redox-based epigenetic regulation is one  of the ways that neuronal and immune function might be connected. Preliminary research indicates that nutritional factors like vitamin B12 and N-acetylcysteine can contribute in modifying such redox-epigenetic status. 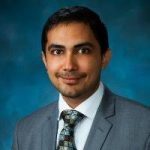