Histamine release occurs as a result of the immune response to an allergen. Histamine irritates and inflames mucus membrane linings of the nose, eyes, throat, and respiratory tract.

Seasonal allergy symptoms can strike with a sudden ferocity when certain trees and grasses begin to pollinate, releasing allergens into the environment. For many people the immune system responds by rapidly producing antibodies which attach to allergens and result in immune cells, called mast cells, releasing histamine. Histamine is an endogenous chemical that irritates and inflames mucus membrane linings of the nose, eyes, throat, and respiratory tract.

In more severe cases, cough, wheezing, loss of appetite, sleep disturbance, and even mood disturbance can result from the chronic discomfort and localized inflammation from the immune system’s overreaction to pollens in the air.1

While the primary intention should always be to address allergen burden and the underlying cause of disease, a holistic treatment approach towards seasonal allergies can and should involve a strategy for prevention while aiming to reduce symptoms as much as possible. A proactive and preventative approach to addressing seasonal allergies is ideal and can begin months or weeks in advance of symptom onset.

However, when it is necessary to address symptoms more acutely, there are a variety of herbal and nutritional strategies available for palliation as well. Depending on the patient, treatment approaches may include dietary and lifestyle modifications, herbal medicine, acupuncture, hydrotherapy, and therapeutic nutritional supplementation. Though there are almost endless options to discuss, the following is meant to provide some overarching strategies to employ along with key botanical options to consider when addressing this common clinical complaint.

Strengthening immune barriers such as the mucus membranes of the upper respiratory and digestive tracts and supporting the microbiota has the potential to modulate immune responses in allergic disease, especially in the context of dysbiosis.2

Hydrastis canadensis (Goldenseal) has been used for centuries to treat inflammatory conditions of both the gastrointestinal and upper respiratory tract. Goldenseal was specifically indicated for inflammation of the mucus membranes. Experienced herbalists today understand the importance of goldenseal when the goal is to strengthen and tonify the mucus membranes of the body, especially those in which the herb comes into direct contact with.

The ingestion of health-promoting bacteria (e.g. probiotics) has a long history of use and study in the context of both allergic and inflammatory disease. Counteracting dysbiosis-associated immune dysregulation and other potential barrier-related defects that have contributed to allergic disease can be of great help in preventing and reducing seasonal allergy symptoms.

Establishing an optimal balance in the Th1/Th2 immune response can also help to calm an over-reactive immune system and help mitigate allergy symptoms.4 Th1 and Th2 are two types of T cells, distinguished from each other by the different types of cytokines they produce.23 Cytokines are chemical messengers of the immune system playing a role in the initiation of important immune processes, such as inflammation during the innate immune response.

The immune supportive effects of Echinacea root are well known and may play a role in preventing seasonal allergy symptoms beyond reducing symptoms such as pharyngitis and runny nose during infection.5 Echinacea is perhaps best employed as an immunomodulator, causing selective induction of pro- and anti-inflammatory cytokines and helping the immune system restore Th1/Th2 balance in various disease states.6

Professor Kerry Bone has likened Echinacea’s action to having adaptogen-like effects towards the immune system, as research suggests that cells exposed to Echinacea cause immune status to increase, stimulating a faster response to an immune threat. Conversely, when cells are overstimulated, Echinacea can reduce the magnitude of the immune response.7 Several mechanisms are presumed to be involved, but the binding of alkylamides with cannabinoid receptors (particularly CB2 receptors) found upon immune cells and the spleen are thought to play an important role.8

Other herbs with important immune-modulating effects including Astragalus (Astragalus membranaceous) and the medicinal mushrooms such as Reishi (Ganoderma lucidum) and Shitake (Lentinus edodes). Other non-herbal examples of Th1/Th2 balancers include zinc and selenium, essential fatty acids, and probiotics. 9-11

Many plants and phytoactives can help control excessive histamine release and thus prevent or control the expression of seasonal allergy symptoms.

Nettle/stinging leaf (Urtica diocia) is a common weed that appears in early spring before the pollens of allergy season appear, and it is perhaps one of the most widely used herbal remedies to treat symptoms of seasonal allergies. Traditionally, the bright young greens would be harvested as a spring tonic and steeped in a tea or eaten as a vegetable. Nettle is known to cleanse the lymphatic system and support an optimally functioning immune system throughout the shift from winter to spring.

Paradoxically, while Nettle can help abate seasonal allergy symptoms, it is also an instigator of an allergic reaction when applied to the skin. Characterized by its spiky glandular hairs which contain histamine, serotonin, acetylcholine, and 5-hydroxytryptamine, its anti-histaminic properties have been attributed to causing feedback inhibition of histamine, which can modulate the immune response.12-13

In vitro studies have shown that Nettle inhibits the release of several key inflammatory mediators and events that are responsible for the symptoms of seasonal allergies, including:

Though few trials have been conducted, in one randomized double-blind study, 57 percent of patients rated Nettles as effective in relieving allergic rhinitis symptoms, and 48 percent said that they equaled or surpassed previously used allergy medications in its effectiveness. 15

Chinese Skullcap (Scutellaria baicalensis) been used extensively in Traditional Chinese Medicine to “clear heat and to dry dampness,” which is considered to be in excess during allergy season. The root is rich in the flavonoid baicalein, which is similar in structure to quercetin and has similarly potent anti-inflammatory effects through the inhibition of lipoxygenase, cyclooxygenase, prostaglandins, and leukotrienes.16

Anti-allergic effects have been studied both in vivo and in vitro and show the downregulation of expression of various inflammatory mediators, inhibition of anaphylaxis when compared to the controls, and significantly decreased histamine release following treatment.17 In one animal study baicalein was shown to improve allergic rhinitis symptoms, as well as histological changes of the nasal mucosa, and inhibit inflammatory response via blocking of JAK2-STAT5 and NF-κB signaling pathways.18

Albizia lebbek (Albizia) stem bark is another herb with a long traditional use in Ayurveda as an anti-inflammatory ideal for allergic conditions involving the respiratory tract, having potent mast cell stabilizing properties perhaps due to modulation of histamine release and cytokine expression of antigen-IgE activated mast cells.19 Like Chinese Skullcap, Albizia has also demonstrated anti-allergic effects in animal models, and administration was shown to significantly decrease sneezing and nasal rubbing in sensitized rats, while pre-treatment also suppressed histamine levels in the nasal mucosa. The authors suggested Albizia was able to alleviate symptoms of allergic rhinitis through suppression of TH2-cytokine signaling as well as histamine signaling-related and histadine decarboxylase gene transcriptions.20

Outside of those discussed, other herbs that may help control seasonal allergies may include the use of leukotriene inhibitors such as Frankincense (Boswellia serrata) and corticosteroid modulation through Ashwagandha (Withania somnifera) and Licorice (Glycyrrhiza glabra). Although there is limited supporting data, excessive mucus production and watery eyes may be aided by the use Eyebright (Euphrasia officinalis) and Myrrh (Commiphora myrrha).

There are clearly many options, but with any herbs chosen, it is important to stress consistency of use and ensure maintenance of the therapeutic dose. And finally, as effective as herbal medicines can be, patients cannot reach their full healing potential without addressing the foundations of health. Limiting the intake of histamine through the diet, eating primarily freshly prepared foods, and maintaining a healthy lifestyle all play an important role in determining the prevalence of seasonal allergy symptoms.21-22 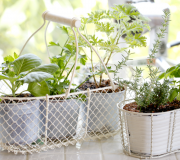 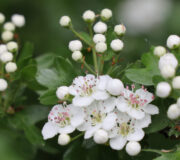