Every healthy adult has small amounts of thousands of different antibodies derived from B cells. Each antibody is highly specialized to recognize just one kind of foreign substance via a hypervariable region of the antibody, known as the antigen-binding site.

Every healthy adult has small amounts of thousands of different antibodies. An antibody (immunoglobulin; Ig) is a protein structure produced by white blood cells of the immune system called B cells, which reside in lymph nodes throughout the body. Each antibody is highly specialized to recognize just one kind of foreign substance via a hypervariable region of the antibody (antigen-binding site). 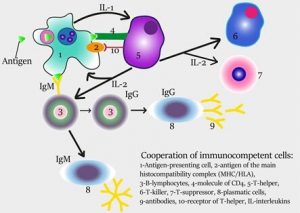 Once a macrophage engulfs a pathogen, peptide fragments of antigens are expressed on the cell surface of the macrophage, and in this scenario, the macrophage is then referred to as an antigen presenting cell. The binding of a B cell with antigens from an antigen presenting cell triggers activity of helper T cells to convert B cells into plasma B cells. This is an important step that leads to the production of copies of a specific antigen-antibody complex throughout the entire lymphatic system.

Antibodies are typically characterized as Y-shaped, with antigen-binding sites on each arm of the Y (heavy and light chain). Antigen-antibody interaction is used as a diagnostic indicator in many laboratory techniques to test for blood compatibility (i.e. ABO blood groups) and for various pathogenic infections. Individuals with immunoglobulin deficiencies are more likely to get infections due to the reduced capacity to defend against pathogens.

Antibody binding to antigens is critical and leads to inactivated antigens by several methods:

Activation of B Cells to Make Antibodies

Circulating B cells in the blood stream can engage and bind an antigen via the antibody-receptor component of the B cell with Class II major histocompatibility complex (MHC) markers. The antigen-specific B cell receptor binds to the antigen presenting cell, the antigen is processed and displayed on the surface of the B cell, and the production of lymphokines is stimulated to trigger the activation of helper T cells and formation of plasma B cells. Then, plasma B cells are able to manufacture millions of copies of the antibodies tailored to the specific antigen. These antibodies then circulate in the bloodstream in search of more matching antigens. B cell antibodies cannot themselves kill an invading organism, but they can use their antibodies to mark invaders for destruction by other immune cells and by complement.1

Image illustrating the steps in the production of antibodies by B cells.

Steps in the production of antibodies by B cells:

Helper T cells only recognize antigens that have Class II MHC markers on the surface of the cell membrane. An antigen-presenting cell, such as a macrophage or a dendritic cell, breaks down the antigen it ingests and then presents small peptide fragments on the cell surface along with the Class II MHC marker. By exhibiting antigenic peptides in this way, antigen-presenting cells enable specific receptors on helper T cells to bind the antigen and confirm, via CD4 protein, that an invasion has occurred. 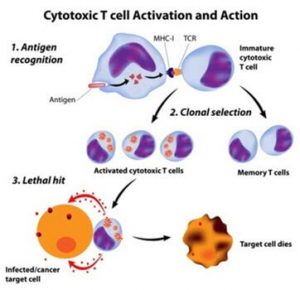 After binding, a resting helper T cell quickly becomes an activated helper T cell. It assumes command of the immune response, giving orders to increase the number of specific antibody-producing plasma cells and the cytotoxic killer cells needed to kill the pathogenic threat.1

CD4+ T cells are commonly divided into regulatory T cells (Treg) and conventional T helper (Th) cells. Th cells (Th1, Th2, Th17) control adaptive immunity against pathogens and cancer by activating other effector immune cells such as CD8+ cytotoxic T cells, B cells, and macrophages. Treg cells are in charge of suppressing potentially deleterious activities of Th cells by monitoring the difference between the body’s own cells (“self” cells) and outside invaders (“non-self” cells).  Treg cells also function to prevent destruction of healthy tissue via the immune system, a debilitating process known as autoimmunity.

Regulatory T cells have become important to researchers who are trying to increase the efficacy of vaccines for cancer and acquired immunodeficiency syndrome (AIDS). In addition to increasing the antigenicity of the immunizing element, a better understanding of regulatory T cells will permit scientists to reduce the immune system’s brake activity, which often limits the effectiveness of vaccines.3

Implications of the Antigen-Antibody Process for Future Clinical Application

Understanding the dynamic process of the antigen-antibody binding process through the antigen binding site is leading researchers to re-evaluate current therapies for autoimmune diseases, such as rheumatoid arthritis (RA) and systemic lupus erythematosus (SLE). Current therapies for autoimmune diseases (e.g., corticosteroids) reduce the inflammatory process but also result in general immunosuppression and can lead to collateral damage in other organs. The goal of the next generation of therapies is likely going to be focused on reducing autoimmunity while at the same time better maintaining immunocompetence.4 While the path to accomplish this goal is not yet clear, the approach may use different strategies:

Another approach would be to develop a monoclonal antibody directed against the IL-1 cytokine receptor, which controls local and systemic inflammation. Blocking IL-1 stimulation with a soluble decoy receptor or an IL-1 antagonist may reduce IL-1 activity and, subsequently, the burden of disease for patients.5-7

Read part 3 of the Immune System Series: Differences Between an Antigen and a Pathogen. 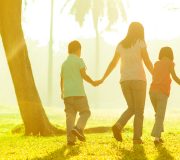 The goal in maintaining a healthy response to inflammation, is not to block inflammation, but to balance pro-inflammatory processes with those that... 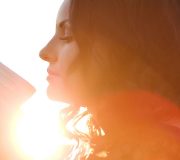 Herbs for stress may address the effects of stress as an undeniable factor in many illnesses, and growing evidence now...