The metabolome of the microbiome is a collection of small-molecule chemicals, including amino acids, enzymes, co-factors, and more produced by and within the gut bacteria that are genetically encoded to function in the body.

There is no doubt that food consumed has an effect on human health. Reading nutrition labels can identify the macronutrients and micronutrients in foods to determine what to eat in order to survive and thrive. However, an important component of nutrition and health that is frequently overlooked is the health of the billions of microbes that live in the human body. The microbes, or bacteria, in the digestive tract, known collectively as the gut microbiome, have been called a “second brain.” Due to busy schedules and stressful jobs, it is common to eat convenient processed foods typical of a “Western diet” that can wreak havoc on the digestive system, resulting in fatigue, acne, and digestive problems or discomfort. Rather than shrugging off seemingly minor health issues, getting to the root cause and improving gut health can revitalize whole body health.

The metabolome of the microbiome is a collection of small-molecule chemicals, including amino acids, enzymes, co-factors, and more within and produced by the gut bacteria that are genetically encoded to function in the body. The “food” or “gut” metabolome is influenced by what food is consumed and, particularly, the dietary pattern followed. That means, even if a person eats a kale salad for lunch, it will not “overcome” the breakfast of donuts and dinner of pizza that comprise the rest of their dietary pattern. Appropriately, the term “metabolome” combines the words “metabolite” and “chromosome.”Over 25,000 compounds exist in the foods consumed by humans, and the interaction of those compounds with the metabolome can produce dietary biomarkers that influence human health, though the mechanisms are not yet fully understood.1

While many gut health interventions focus on probiotic supplements, the research cited above indicates that gut health is much more complex. As a “healthy” microbiome is characterized, though, it will be possible to tailor dietary interventions both to improve the diversity of the microbiome and the metabolome of the microbiome. For example, in the case of obesity, researchers found that individuals who had a less-diverse microbiome were likelier to have “more pronounced dys-metabolism” and higher levels of systemic inflammation.4

Plant-based dietary patterns like the Mediterranean diet appear to have a beneficial effect on gut health, including the diversity of the microbe species in the gut and the resulting metabolome of the microbiome. The foods humans eat impact health beyond the macronutrients and micronutrients in the food, and their influence on the human parts of our body. Perhaps the “second brain” of the gut microbiome should be considered a second metabolism influencing the development of conditions like hypertension, dyslipidemia, and cardiovascular disease. In a clinical setting, it may soon be possible to identify individuals who are more susceptible to chronic inflammatory conditions based on their metabolic and microbiome profiles. 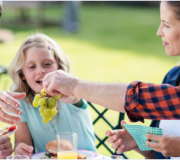 A study aimed to investigate the effects on gut health of yeast fermentate in a healthy population with gastrointestinal (GI) discomfort, and reduced...