Take a Deep Breath: The “Coherence State” and its Effects on Wholistic Wellness

The Coherence State is a state in which an individual’s galaxy of interactions is in perfect harmony. The more time spent in this state means less friction, breakdown, and less disease.

A quick thought experiment: if asked to point to the body, where would most people point?

Most people would poke the skin above the heart or maybe the stomach. Some may point to the head. Why not the foot, shoulder, or kneecap? Those are all part of the body too, right? Upon attempting to define the word “body,” most people quickly realize what an unhelpful word it is outside of vague generalities.

Google’s official definition of the word body is “the physical structure of a person or an animal, including the bones, flesh, and organs,” but even this definition is lacking. What about the nervous system, eye lashes, or the millions of beneficial microbes living in the gut? All of those elements might fall under the umbrella of “physical structure,” but what about the metaphysical – emotions, desires, and the “soul.” Are these parts of the body or something entirely separate?

Human bodies are not one thing, even though people often think of and treat them as single organic wholes. Even most allopathic physicians treat the body as one thing: a single car to tinker with, study, and repair over time. This definition is too narrow, and embracing it can keep people from truly understanding what it takes to create balance, pursue alignment, and achieve true health.

Each of these systems has a job to do and a method of getting its work done. The cardiovascular system, for example, is charged with distributing blood and its benefits throughout the body.

The cardiovascular system becomes very complex very quickly. This system is not just transporting blood throughout the body. It is also interacting with the other 11 systems in millions of different micro- to macro-interactions. These interactions can go from simple (the nervous system tells the heart to pump the blood) to slightly complex (blood carries nutrients and proteins to the muscular system while simultaneously handling microscopic metabolic waste products).

There are several billion blood vessels of different sizes in the body. If they were all ripped out of an adult human and laid down end to end, they would circle the entire planet with ease. This wild red web is distributed with so much complexity throughout your body, that allopathic physicians still do not know all the ways in which blood truly interacts with the body it supports.

And that is just a single system.

Human bodies are not one entity. They are millions – even billions – of simultaneous enzymatic actions, reactions, processes, and outcomes. Thinking of the body as a car does not really do it justice. It is bigger than a car. It is bigger than a city. It is bigger than a planet. It is an entire galaxy of interactive components. Thus, becoming “healthy” is less about trying to polish a leaky radiator and more about achieving what ancient astronomers would call “The Music of the Spheres.”

The key is not fixing broken components with momentary pills and procedures. The key is the lifelong pursuit of organic balance by addressing the body with a systems biology approach.

Heart rate variability (HRV) analysis suggests that the heart is a sensitive marker for emotional changes, as reflected in heart rhythm patterns. In addition, perturbations in the body’s preferred coherent pattern of heart rate variability may be a marker for the impact of chronic illness on homeostasis – the body’s hardwired system to stay in balance. In fact, lack of balance, disharmony, and incoherence all describe the end-state reached when multiple clinical imbalances are present giving rise to disease.

A state in which an individual’s galaxy of interactions is spinning and singing in perfect harmony is called the Coherence State. And it is easier to achieve than most might think.

The body is a collection of innumerable components and processes. But while it may not be possible to count every interaction in the body, it is possible to follow the music.

A typical physical measures things like heart rate, blood pressure, and respiratory performance. These are strong measurements, but to achieve an even clearer picture of the body’s overall wellness is to measure the changes between these metrics, not just the metrics themselves. Listen for the rhythm instead of analyzing each individual note.

HRV, Blood Pressure Rhythm (PTT), and Respiratory Rhythm are all powerful metrics when it comes to painting a truly accurate picture of how the “galaxy” is performing. When measuring each individual beat of the song, sight of the bigger picture is lost, but when zooming out and measuring the entire piece, more useful insights can be obtained. 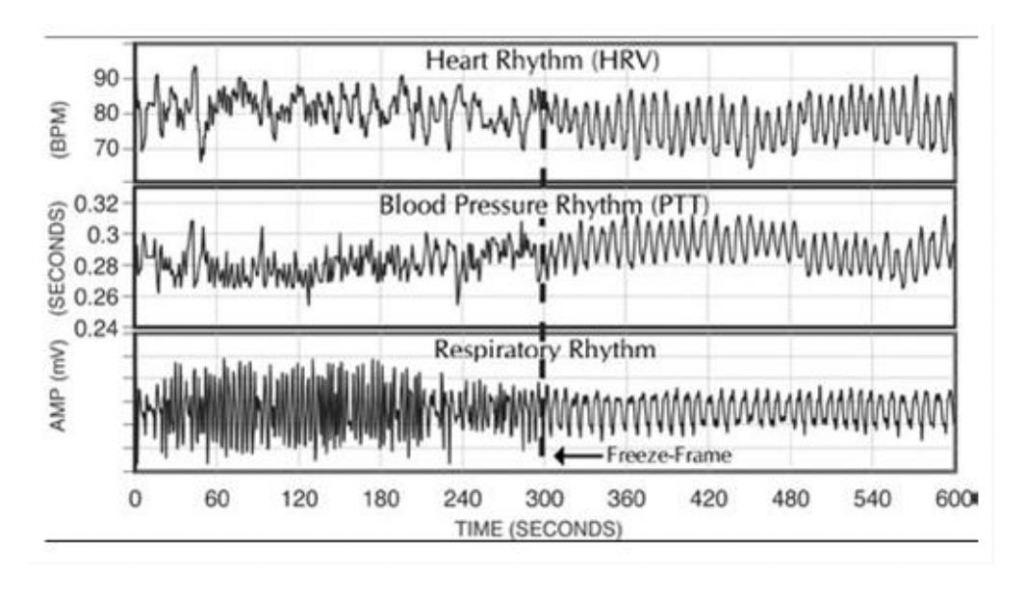 This readout represents the difference in HRV, PTT, and respiratory rhythm in a single human being. The black line in the middle of the waveform represents a break point. The chaotic scrabble to the left of that line represents a time before this person entered the coherence state, while the smooth, unified waveforms to the right represent what happened after this person achieved coherence.

So what happened? How did this person smooth out their waves so completely? What did they do to get their spheres to sing so beautifully?

Functional medicine practitioners commonly use the concept of the HPATG Axis, which describes the interaction between the hypothalamus, pituitary, adrenal, thyroid, and gonadal hormones. When there is balance in this axis, the endocrine system can perform at an optimal level, but once out of balance it can quickly result in symptoms which include fatigue, anxiety, depression, weight gain, illness, and many more clinical imbalances.

If HRV, PTT, and respiratory rhythm are all brought into a smooth alignment, this is a fantastic indicator that the body’s millions of interactions are performing well. And so, instead of reaching for a pill, a majority of people would be better off focusing on something as simple as breathing.

Here is an exercise for patients to try: lower the shoulders, unclench the jaw, open the fists, and take a deep breath.

It is easy to be unaware of just how tense the body’s “resting” state actually is. Achieving true coherence is not quite as simple as that, but if an individual can get to a point of naturally and consistently doing those three things, then the journey to being a holistically healthy person is well underway.

With every breath, the body is continuing and restarting the entire galaxy of interactions that sustains it. Mastering breathing takes one of the those three vitally important lines on the chart above. And the other two follow the leader.

When the respiratory rhythm is smooth, the heart rate moves into a healthier rhythm. When the heart is performing better, blood pressure begins to align as well. This is not magic. It is science.

Every day humans are all faced with as many circumstances as their bodies have interactions. But they get to choose how they handle them. If they choose anxiety and negativity, then they will be rewarded with more friction in their body systems, more toxicity in their bodies, and more supernovas in their “solar systems.”

Considering a different choice, what if humans chose to breathe deeply and purposefully with positivity in mind? Those better breaths will trigger better processes. Every single one of them.

WholisticMatters would like to acknowledge Ryan Lazarus MSc, CNS, DC for his contributions to the content of this article. 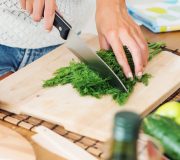 A New Regulatory Framework for Cannabis As A Plant-based Product

In a recent issue of the peer-reviewed journal, HerbalGram, a long-term solution for the United States cannabis industry to enter into the global...

Correction of HPA axis abnormalities with agents that can modulate and restore homeostasis within the endocrine and nervous system such as herbal... 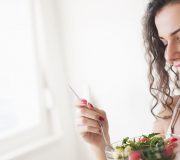