It’s not the unhealthy food we’re eating that’s killing us, it’s the healthy food we’re not eating. This is according to a new report from The Lancet in a study of adults ages 25 and older, in 195 countries across the globe, and analyzing trends between 1990 and 2017. According to the report, poor diet is globally responsible for more deaths than smoking and high blood pressure.

The study, “Health effects of dietary risks in 195 countries, 1990–2017: a systematic analysis for the Global Burden of Disease Study 2017” was funded by the Bill & Melinda Gates Foundation. The study accompanies a January 2019 report in The Lancet promoting a global focus on whole food nutrition and the power of phytonutrients to improve both quality of human lives and environmental sustainability (read more).

Researchers reported 11 million deaths directly linked to poor diet. They looked at 15 key dietary risk factors and their impact on death and disability, including consumption of:

The report showed that the top three major risk factors were high salt intake, low whole grains intake, and low fruit intake. These three factors were shown to be responsible for more than half of all diet-related deaths globally in 2017, including deaths from cardiovascular disease, cancer, and type 2 diabetes.

Lead author Ashkan Afshin, PhD, from the Institute for Health Metrics and Evaluation at the University of Washington, called the report “the most comprehensive analysis on the health effects of diet ever conducted.” 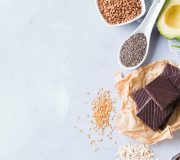 With declining nutrient content in foods and broad consumption of SAD-style diets, deficiencies in essential nutrients have become extremely common.

The American population is growing and aging, and an increasing risk of sarcopenia often accompanies age, especially for women.