The lining of the intestine is one cell layer thick and serves as the gut barrier. The function of this barrier is to selectively allow passage of nutrients into the systemic circulation while preventing access to harmful microbes, large antigenic food particles, toxins, medication, and metabolites capable of triggering the immune response.

Emerging research has demonstrated that the mucosal barrier function is vital to gastrointestinal (GI) and systemic health. The breakdown of this barrier may be the first step in the development of food sensitivities and autoimmune disease. The barrier constitutes tightly fitted epithelial cells that are “glued” together via tight junctions that include proteins such as zonulin and multiprotein junctional complex zonula occludens, which can control the intracellular and paracellular uptake. If there is disruption of the tight junctions – a “leaky” junction – increased intestinal permeability ensues.

At the cellular level, a protein called zonulin is modulated to increase intestinal permeability and destabilize the mucosal barrier. Zonulin is released from intestinal cells in response to a trigger and enters into the gut lumen. Zonulin subsequently binds to receptors on the epithelial cells which prompts a cascade of reactions, culminating in the phosphorylation of tight junction proteins that destabilizes the junction and increases intestinal permeability. With a more porous gut lining, large food particles, bacterial cell walls and other infective components, gliadin, toxins, and metabolites are able to enter into the systemic circulation. In turn, this chain reaction activates the immune system.

A compromised gut lining results in malabsorption, food sensitivities, and increased incidence of allergic and autoimmune conditions. Altered intestinal permeability is part of the equation for the far-reaching impact of gut health on non-GI symptoms and diseases.

The etiologies for increased intestinal permeability are elusive but may include dietary gluten, infection, dysbiosis, nonsteroidal anti-inflammatory drugs (NSAIDs), stress responses, strenuous exercise, alcohol, small intestinal bacterial overgrowth (SIBO), and poor nutrition. Clinically, increased intestinal permeability is not considered a stand-alone diagnosis; rather, it is considered an underlying mechanism for other diagnoses and may be one of many causes for irritable bowel syndrome (IBS). 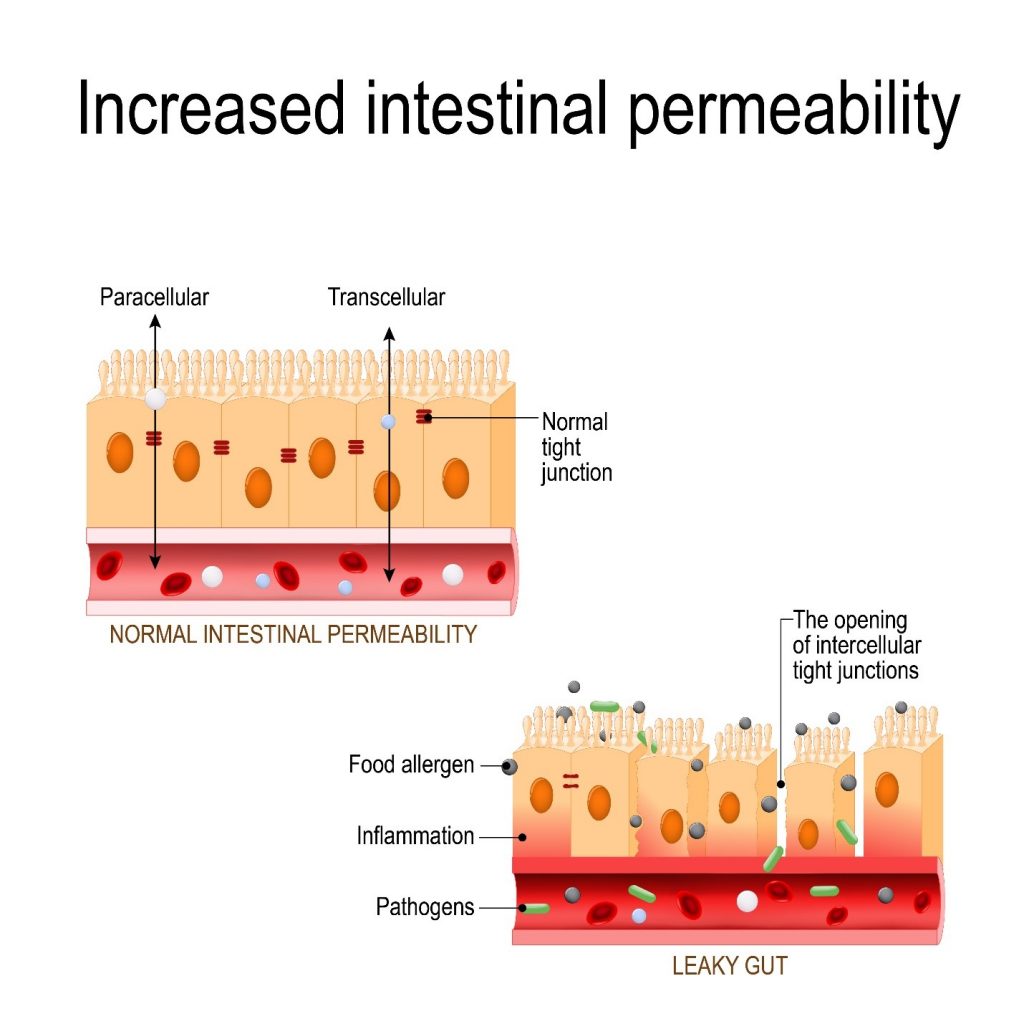