Gut inflammation is a root cause of gut dysfunction that can arise from multiple factors, including dysbiosis and poor diet. These factors predispose individuals to dysbiosis and increased intestinal permeability. In turn, this leads to destabilization of the gut ecosystem and susceptibility to an inflammatory cascade that injures the gut lining and has downstream inflammatory effects on other organ systems, including the brain. Around 80 percent of the immune system is housed in the gut, and both the innate and adaptive immune systems are essential components of the gut barrier. Gut-associated lymphoid tissues (GALT) are highly specialized centers distributed throughout the gut that incorporate antigens, antigen-presenting cells, regulatory cells, and effector cells. With unfavorable factors, such as antibiotics, stress, inflammatory foods, medications, and toxins, that favor dysbiosis and increased intestinal permeability, pathways for two types of helper T cells (TH1 and TH2) are upregulated. This leads to mucosal injury, chronic inflammation, and autoimmunity. 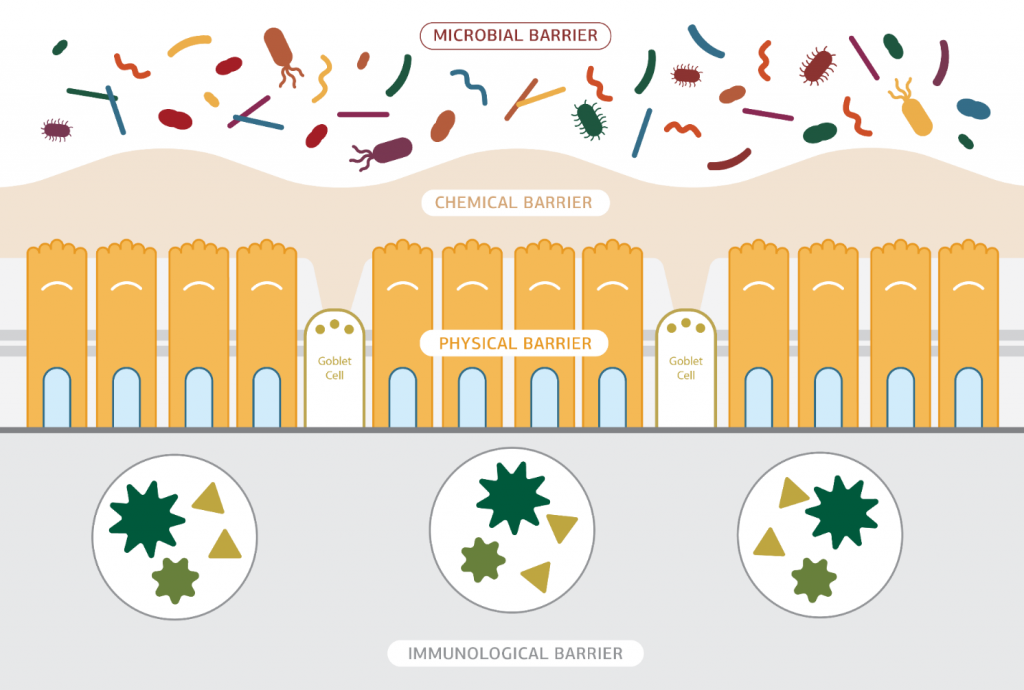 In the last 50 years, the advent of vaccinations, heavy antibiotic use, and improved sanitation and hygiene have dramatically decreased the incidence of some infectious diseases. Within this period, there has also been drastic changes to diet, with increased consumption of carbohydrates and fats in highly processed foods and decreased intake of plant fiber. This forms the signature of the Standard American Diet (SAD) which consists largely of processed ingredients and contains limited amounts of plants and fiber. Based on these two observations, which lead to major remodeling of the microbiome, researchers have developed two hypotheses to help explain the dramatic rise of chronic inflammatory diseases as diverse as inflammatory bowel disease (IBD), asthma, multiple sclerosis, depression, rheumatoid arthritis, coronary artery disease (CAD), and obesity, including the hygiene hypothesis and the diet hypothesis.

The hygiene hypothesis is hinged on the proposition that early-life exposure to diverse microbes helps the immune system develop and differentiate between infectious and harmless agents. Multiple factors before birth, during delivery, and during the first several years of life help to grow a robust microbiome and highly intelligent immune system:

Previous studies have shown that children raised in rural areas have more frequent microbial exposures and lower incidences of asthma, leading to the belief that a cleaner environment, such as with less pollution, results in a dysregulated immune response and consequent development of inflammatory diseases. In the modern era, with high rates of cesarean section births, less exposure to breast milk, high use of antibiotics, daily use of hand sanitizers, the idea of the “kid’s meal,” and smaller families, children are often set up with a poorly trained immune system and higher risk for inflammatory conditions including food and environmental allergies, autoimmune disease, and obesity. At the cellular level, this translates into changes in gut permeability, chronic inflammation, alteration in insulin sensitivity, and metabolic syndrome.

There are different types of immune responses in the gut, including IgE and IgG responses. IgE is implicated in an immediate hypersensitivity response with symptoms of classic allergic reaction. IgG is implicated in a delayed reaction to certain foods that can occur hours to days after consumption. This adverse reaction to foods can over-activate the immune system creating inflammation in the body and a variety of non-specific and general symptoms such as headaches, fatigue, joint pain, anxiety, depression, skin rashes, abdominal pain, bloating, and diarrhea. Implicated foods that lead to food sensitivity include, but are not limited to, gluten, dairy, soy, and red meat. Anti-inflammatory dietary plans focus on whole food nutrition and healthy fats with a favorable ratio of omega-3 to omega-6 fatty acids.

The inflammation connection is a major reason for why gut inflammation is linked to disparate conditions including Crohn’s disease, rheumatoid arthritis, coronary artery disease, asthma, depression, and obesity. Modern science has proven that “all disease begins in the gut” and whole food nutrition is the basis for a healthy gut microbiome and low risk for chronic inflammation.