Lifestyle Impact of the Microbiome

Diet is linked over many generations. Before a baby is born, a mother may have already skewed her child’s flavor preferences by way of what she consumed during pregnancy. Following, the microbiome of the child will be that of their mother’s from the birthing process, as well as if she chose to breastfeed, affecting immune function, allergies, bacteria development, and much more.

The collective genetic material of microbial organisms found throughout the body, their habitat, and the condition of their environment is known as the microbiome. Microbes can be mutualistic, commensal, or parasitic. They play many passive and active roles in the bodily systems but are especially involved in digestive health.

The bacteria throughout the body are broadly classified into a distinct phylum. Each stage of life will have a different gut make-up. Common bacterial phyla found in the human gut include:

The remaining approximately two percent of bacteria are composed of a few different phylum. These numbers vary greatly amongst people and are usually different in the different locations of the gastrointestinal (GI) tract. For example, in the jejunum Proteobacteria are more common than Bacteroidetes.

Colonization with microbes begins at birth and then changes constantly over the course of the lifetime. From birth throughout the first year of life, the microbial environment is very dynamic. Humans start their lives with limited diversity of bacterial species, allowing microbes introduced through the infant diet and external environment to rapidly colonize the GI tract. Individual differences in bacterial species populating the infant microbiome are much more common than in adults.

Children experience the progression of a more diverse bacterial population, characterized by increased proportions of Firmicutes, Proteobacteria, and Actinobacteria and a decrease in Bacteroidetes. The microbiome of children showcases fewer of the traits associated with inflammation and metabolic dysfunction. Information on differences in adolescent microbiomes is limited, but early investigations have found that there are a higher amount of Clostridium and Bifidobacteria compared to adults.

In adulthood, the bacterial population in the GI tract stabilizes. The primary groups become Firmicutes, Bacteroidetes, and Proteobacteria. Firmicutes and Bacteroidetes are the main contributors, and their proportions are linked with the ability to harvest calories from food. Moving into old age, microbiome changes have been associated with declines in health status. Throughout the course of the entire lifetime, a combination of host-derived and external influences manipulates the makeup of the microbiome. 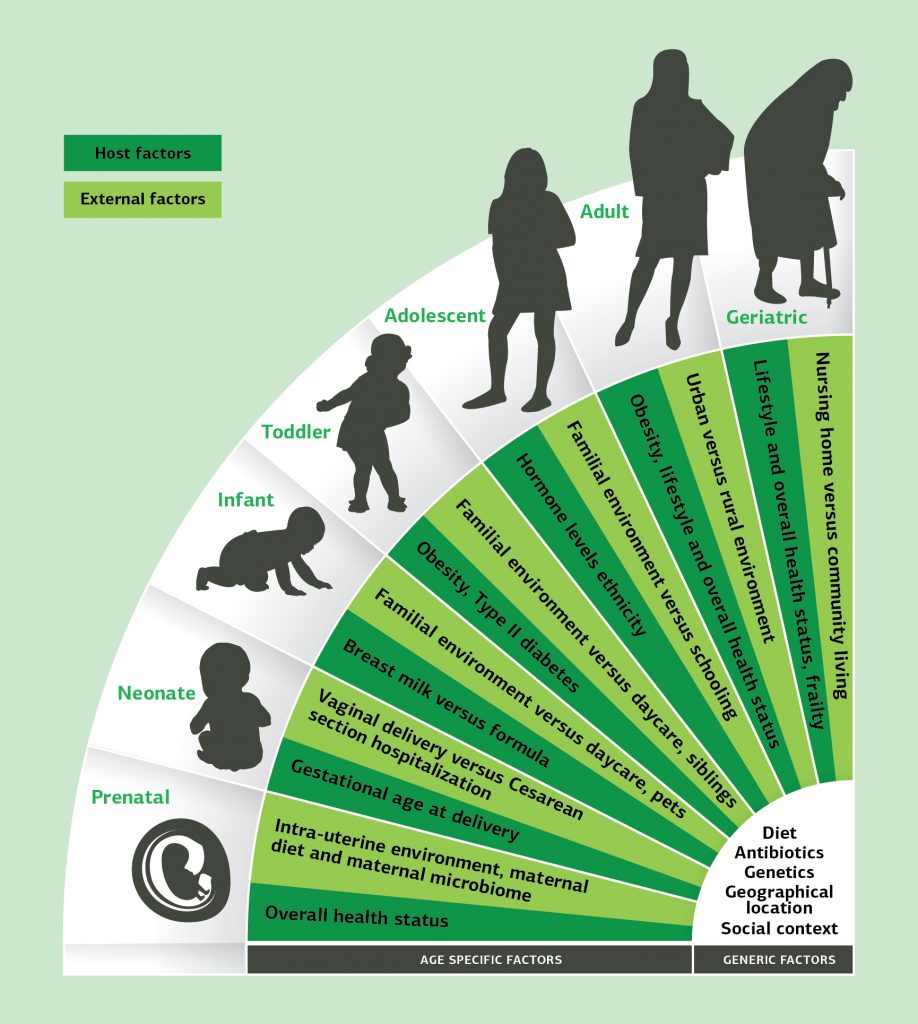 Adapted from: “The human gut microbiome in health: establishment and resilience of microbiota over a lifetime,” by K. Greenhalgh, K. M. Meyer, K. M. Aagaard, and P. Wilmes

Due to the extreme variability in the microbiomes of healthy individuals, it is difficult to pinpoint an exact makeup of the ideal microbiome. Rather, the focus should be on a healthy functional core of microbes that can carry out specific sets of bimolecular functions in the GI tract. Microbial diversity – both in number of taxa present and in number of microbial constituents – is recommended to maintain adequate gut health. This provides stability by offering a functional redundancy of microbial functions. It also helps the GI microbiota recover quickly from the introduction of pathogens or from medications. A relative lack of diversity and missing species seen in microbiomes of people with certain health conditions is referred to as dysbiosis.

Diet is one influence that is able to drive changes in microbial populations in the GI tract of humans. Thus, diet is a potent regulator of the immune system and can drive chronic inflammation,  the primary driver of all chronic conditions.  Because diet can be modified, it is a powerful intervention tool for introducing change into the microbiome.

Probiotics are live microorganisms that, when administered in adequate amounts, confer a health benefit to the host. The table below covers many of the well-known probiotic bacteria species and studies that showcase action in digestive health, but it should be considered that each of these species contains many different strain types able to elicit different bioactive effects.

* Unable to locate study bacteria without co-administration of other probiotics

Many of these probiotic microbes are able to be administered to a patient through concentrated supplements or by ingestion of specific fermented foods such as yogurt, tempeh, kefir, miso, and kimchi. Strain specificity plays a major role in probiotic function, especially in supplements. When looking at specific trials for effects, consider that the specific strains are the microbes eliciting this bioactivity.

Bacteria utilize food components from the human diet that make their way to the GI tract undigested. Different bacteria specialize to ferment leftover substrates and use them to produce different byproducts. For example, many Bacteroidetes are efficient at degrading complex sugars and proteins into short chain fatty acids, which are then able to be taken up by the GI tract, providing an energy harvesting quality.8

Dietary influences on the microbiome stem from the overall dietary patterns of an individual, consumption of specific foods, and even the constituents that make up foods. In Western societies, high fat, high refined sugar, and low fiber diets result in a consistent decrease in microbial diversity in the GI tract. This follows the same trajectory as the rise of chronic conditions in these areas.7 Groups of specific microbes are able to quickly respond to specific dietary changes; when certain foods increase the concentration of beneficial microbes they are referred to as prebiotics.

The definition of prebiotics according to the International Scientific Association Probiotics and Prebiotics is: “A substrate that is selectively utilized by host microorganisms conferring a health benefit.” Prebiotics should be specific to the microbes of which they encourage growth, compared with other foods and food derived substances that are likely to feed the growth of a broad array of microbial species.

Whole foods, such as banana, whole grain wheat, and whole grain corn – have also been able to meet the “prebiotic” definition.9

Polyphenolic compounds are abundant in plant foods and compose a major source of health benefits from a high plant diet in humans.1 Polyphenols are notable for their actions as antioxidants, anti-inflammatory stimulators, and for certain antimicrobial effects. In addition to these actions polyphenolic compounds can provide substrates for energy for certain microbes, offering the potential to be selective growth-reducing and -stimulating compounds. Microbes can bio-transform many plant phenolic compounds, creating new smaller compounds in the lower GI tract.